In this interview, we are joined by two very special guests, Svetlana Chibireva and Laura Schleifer.

Svetlana is a pro intersectional vegan with an interest in looking at veganism as a political and ethical philosophy through a critical lense in order to challenge current narratives in mainstream veganism. She was born in Stalingrad, a city recovering from the atrocities of nazi occupation during world war 2. She grew up with relatives, family friends and members of the local community who experienced the horrors of concentration camps as well as medical experimentation under fascism.

Laura is a Jewish American who has been researching the deep interconnections between animal exploitation, eugenics, Nazism and animal rights as part of a book she is working on, "Liberating Veganism; How Dominance and Control Issues are Sabotaging the Movement--And How to Free Ourselves" for Vegan Publishers. She also gave a talk relating to these themes at Vegfest UK earlier this year.

Svetlana and Laura joined us to speak about Holocaust and genocide analogies in animal advocacy and about the type of advocacy that can turn marginalised groups away from the animal movement.


**This interview requires a trigger warning for language and subjects associated with the Holocaust, including talk of rape**.


To listen to this interview please click HERE or use the player above. 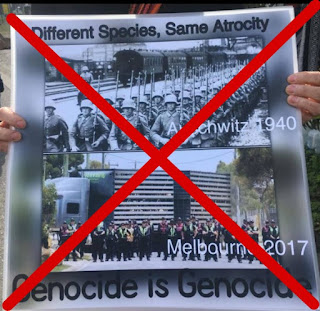 Posted by ARZone at 8:10 AM No comments: